While many Washingtonians were reveling in the spirit of St. Patrick or cheering on their NCAA picks at the Verizon Center, I was at the Shakespeare Theatre having just as much fun.

It was quite early this morning when I finally got home. The Shakespeare is right across the street from Verizon and both events let out at the same time. It was March madness on the subway and, from what I could tell, there were only two of us on the train who had not come from a basketball game or an Irish bar—one of the cast members and I. 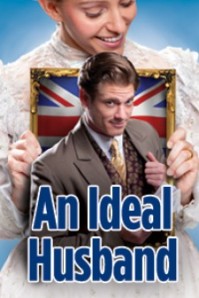 Thanks to a generous friend—the same one who took me to see George Bernard Shaw’s Mrs. Warren’s Profession there last summer—I enjoyed a delightful performance of Oscar Wilde’s An Ideal Husband, a clever comedy about integrity, political pressures, sky-high expectations and misunderstood relationships. The play had some plot similarities to Mrs. Warren’s Profession, including discovery that one’s wealth sprang from shady beginnings. I also noticed that, after writing their plays in the late 19th century, both Shaw and Wilde were reprimanded for indecency, Shaw for his theme of prostitution and Wilde for personal behavior.

In a review appearing yesterday, The Washington Post criticized the play; not the production or the acting or the directing or the sets or the costumes. The Post just didn’t like the play. The Baltimore Sun was more favorable. I found it beautifully written and superbly funny.

As I was waiting on the train platform to catch the subway home, I noticed among the throngs of revelers, the young man who had played Prinz Frederich von Glücksburg in the play, standing alone with the earbuds of his iPod tucked into place, waiting for the same train. In the time it took me to exit the theatre and walk to the subway, he had exited the stage, shed white tie and tails, pulled on skinny jeans and skate shoes and walked to the subway.

We boarded the crowded car and, a couple of stops later, much of the crowd exited. Prinz Friedrich found a seat and I sat down next to him. I wanted to compliment his performance and the way he delivered all of his lines in impeccable German.

I had met this young actor, Logan DalBello, a couple of times before. I know he’s a high school senior who is thoughtfully planning his next move. He has great drive and ambition for an acting career and immense talent to match. For the last several months, in addition to applying to colleges and auditioning for university theater programs, he has gone to school at 7 a.m. and rehearsed at the Shakespeare from noon to midnight. While his friends no doubt are expressing senioritis and spring fever, he is doing eight performances a week.

Sitting on the train, where he probably wanted to decompress and collect his thoughts for the next day, he graciously indulged my compliments and questions. He even asked me what I liked best about the play.

I loved the play, of course, but what I liked best was sitting next to him on the ride home.

As a native of Washington, D.C., I have always thought the nation’s capital could take some lessons from New York City. Fashion. Taxicab regulation. Pizza. Liverwurst on rye.

Unfortunately, it seems that, several years ago, Washington took a tradition from the Big Apple and planted it right here inside the Beltway. C’mon. I’d rather have the liverwurst.

Sunday afternoon, between 3:00 and 6:00 p.m., Washingtonians observed their fourth annual No Pants Metro Ride by boarding the subway and peeling off their pants. Organizers rallied riders via Facebook and other social media, instructing them to act as if nothing were wrong as they rode past all the popular tourist stops. Amusing, I suppose, as temperatures stayed mostly in the 20s. The stunt paid off for riders who took advantage of a local eatery’s offer of half-priced hamburgers for half-dressed patrons.

Those who know me know that I can’t even bear to sit next to someone wearing shorts on an airplane. The thought of spending Sunday afternoon in a crowded subway car awash in goosebumpy, pale, shivering, shrinking flesh made me glad to have been, well, anywhere else.

Filed under Beauty and Fashion, Rants and Raves, Sports and Recreation, Technology and Social Media, Travel