Thank you, Mitt Romney, for raining on my wilting blog.

If you hadn’t noticed, the Word Nymph’s crop of lexicological sustenance has been as dry as the American plains. Until today.

The presumptive GOP nominee has given us occasion for instruction on a homonym we haven’t addressed in this place. In announcing his selection of a running mate, Romney’s press release said of Rep. Paul Ryan (R-Wis.):

“He is Chairman of the House Budget Committee, where he has worked tirelessly leading the effort to reign in federal spending and increase accountability to taxpayers.” 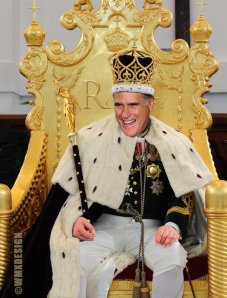 Did you spot it?

Reign in federal spending. Wrong. It’s rein. As in a strap controlling an animal.

Perhaps Mitt was going for the pun. Or maybe his error was hopeful of his intent to reign in the new year. That’s reign, as royalty on a throne.

We see the spellings of these often confused.

It’s rote to me, but here’s a little clue to help get it straight:

Reign – pertains sovereign occupation of the throne. Sovereign has a g in it; so does reign.

Having written a fair number of executive briefing books in my career, it’s hard for me to resist drafting briefing notes for presidential hopeful Mitt Romney as he faces important primaries in the South in a few days.

I trust he has taken a regimen of prophylactic Mylanta to secure his sensitive system from the plattersful of barbeque and hush puppies he’ll gobble along the campaign trails of Mississippi and Alabama this weekend.

He has already bragged about eating “a biscuit” and liking grits, believing this will endear him to Dixie delegates he seeks. At least he used grits, plural, after having professed his love of “sport” in Daytona, at the risk of defeating the purpose of yukking it up with the NASCAR crowd.

Romney boasted about having mastered “y’all,” as if contracting a second person plural were colloquial rocket science.

I informally canvassed cohorts in the southern states to learn what they might contribute to my fictitious briefing book. What terms must the candidate master to prove he’s southern-savvy?

One person cautioned Mr. Romney to stay far away from the Paula Deen method. Simply inserting extra syllables is only patronizing and insulting.

Some suggestions came in under what I believe is an erroneous assumption that good grammar doesn’t matter in the South:  “We’re gonna win this thing, Good Lord willing and the creek don’t rise” and “I need me some red eye gravy or my grits just ain’t right.” If Candidate Romney buys into these in next week’s primary elections, he might as well not come back for the general.

Some submissions I received were right out of the stereotypical Paula Deen phrase book: “I’m plumb tuckered out,” “I’m fixin’ too go down the road a piece” and “Oh my Lorward.” Most came from people who might delight in poor ol’ Mr. Romney’s taking bad advice.

When I sent out my solicitations yesterday, I was hoping to get a more esoteric glossary, containing a few of the words and phrases—actual, not stereotypical—I had to learn upon marrying into a Southern family. This page from my briefing book will help the southern gentleman from Massachusetts fit in with voters in Miss-sippi and Alabama without a single y’all.

Romney-speak:  I beg your pardon?
Translation:  Do what?

Romney:  It appears that would be so.
Translation:  I reckon.

Ten thousand bucks you can come up with more?

While watching news coverage of the New Hampshire primary over breakfast yesterday, I gagged on a banner caption that read:

Once I got the unseemly visual out of my drowsy head, my next reaction was to laugh at the mixed-up phrase. In the race for the GOP nomination, Ron Paul is, figuratively, of course, “nipping at” Mitt Romney’s heels, not nibbling them. 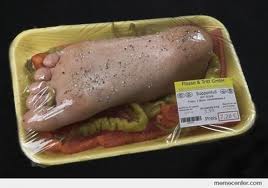 Before I sent an e-dig to a friend who I knew was working on location for the station I was watching, I thought I’d better dig a little deeper. It seems the only error the station made was not putting the nibbling reference in quotes–and perhaps omitting “at.” Paul indeed said in a post-primary speech, “We’re nibbling at his heels.” (Again with the “we.”)

This might be the first time a candidate put his opponent’s foot in his mouth.