The great cleaning-out project has yielded yet another artifact.

There’s no trace of a date, but we can see that the one-inch-by-three-inch clipping is quite yellowed and worn. It might be 10 years old or more. It reads, and I annotate:

IF DEC. 13 IS YOUR BIRTHDAY: Your unorthodox views separated you psychologically from one or both parents.1 You are frank, outspoken and romantic.2 You are drawn to people whom others consider “weird.”3 You travel more than most4 and constantly will fight for the underdog.5 Taurus, Leo and Scorpio persons play major roles in your life,6 could have these letters in their names: D, M, V.7 Your most romantic, profitable month of next year will be May.”8

1 I’m the one with the unorthodox views?
2 Yes, a typical Sagittarius.
3 They are drawn to me.
4 Thirty-one cities this year; yeah, I’d say that’s about right.
5 I’d like to think so. Underdog was one of my favorite cartoons.
6 Cindy Canz, Brother John, Aunt Patsy.
7 In a good year, DMV plays a minor role, if any.
8 Romantic and profitable? Is that possible?

Today’s was boring, so I’ll stick with the one from nineteen-whatever-it-was.

In case you missed it last year, take an amusing stroll through The Washington Post of December 13, 1959. But no horoscope in 1959. Too unorthodox.

Filed under Family and Friends, Holidays

Tagged as birthday, horoscope, If December 13 is your birthday, Washington Post

Having just opened today’s mail, I eyeballed a credit card statement for accuracy before I put it in the queue for payment.

There was a charge I didn’t recognize, from a hotel in which I stayed on a recent business trip. All expenses for the trip had been put on my business card and charged to my client. This one, for $39.77, was a mysterious personal charge.

I called Marriott and was put through to the corporate billing office. When I reached a human being about the charge, which had been tagged “F&B” for food and beverage, the billing clerk and I together determined that the charge was made at the hotel gift shop. This still did not jog my memory.

The clerk delved deeper in to the system.

“Our system shows that you purchased 13 paper items.”

“Paper items,” I questioned myself silently, while staring at the stack of greeting cards that has towered on my desk, neglected and unaddressed, for the last three weeks.

“Oh, those must have been greeting cards,” I remembered aloud.

Embarrassed, I replied, “Did you have to remind me of that?”

She was  not amused. “Would you like me to e-mail you an image of the itemized receipt?”

“No, that won’t be necessary,” I huffed back. Now she and whoever monitors the call for security purposes are privy to my greeting card and sugar addictions.

The moral of this story had something to do with memory but I can’t for the life of me recall what it was.

Year of the Nymph

On March 31, 2010, I wrote my first blog post, questioning the value of blogs. My premise was that no one wants to read anyone else’s innermost thoughts—and blogging seemed to be the place where innermost feelings become outermost feelings. But I went ahead and started Word Nymph anyway. 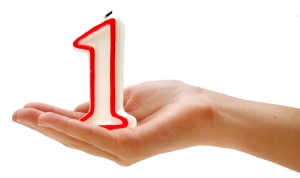 My one-year anniversary post isn’t going to be anything spectacular, so if you’re reading this blog for the first time today, please dig deeper into the archives before you form a first impression.

If you’re among the small but potent community of regular readers and commenters, thank you. Thank you for your faithfulness, even on days when your basket is brimming with reading matter. Thank you also to the four or five people who advised me in the beginning of this undertaking. And thank you to my husband, who kisses me good night as I sit in the late hours staring at a blank screen and panicking about what I will write about the next day. Three hundred nine times, so far.

Over the course of the year, I’ve heard from people that they want more personal stories of my childhood or of the careless foibles of my adulthood. Others believe I should stick to my knitting; one reader said he was going to unsubscribe because I wasn’t doing enough on language and grammar. At times I’ve wondered how I might satisfy everyone in this regard. But, as Ricky Nelson once sang, “You can’t please everyone, so you’ve got to please yourself.”

Some readers tell me they can’t keep up with my six-days-a-week schedule,  that they get behind and struggle to catch up. I don’t want people feeling like they’re drinking from a fire hose, so maybe I should slow down, pace myself so I don’t run out of ideas, or worse, generate forced content for the sake of adhering to a self-imposed schedule. On the other hand, some readers call me when I’ve posted late or missed a day, wondering where their Word Nymph is.

As I struggled with these questions, a friend and supporter sent me a link to another blogger’s ideas. These very usefully address my very conundrums. If you’re contemplating starting a blog yourself, or if you’d like to join me in contemplating Word Nymph’s future, you’ll find these thought-provoking—and a good read all around.

I know one thing for certain. Your comments–good or bad, serious or funny–are what make it worth the effort.

That’s it for today. Still thinking about the future. I welcome your ideas.

Thanks again for reading. Must find cake.

About 10 years ago, the Albert Einstein College of Medicine completed research, funded by the National Institutes of Health and published in the New England Journal of Medicine, finding that frequent dancing improves mental acuity and protects against dementia better than any other type of physical activity.

Stanford University published an article about the study, not because they are one of the top medical institutions in the country but, and this was news to me, they have a vibrant dance department. They tout the 2001 study and other research to promote the University’s many dance programs.

I’m not sure how this bodes for my personal sharpness or how I will fare into my golden years. Except for a few ballet lessons as a child, and as a pretend go-go dancer in our garage when I was six, I didn’t dance much as a child. Not as a teenager, nor as a young adult, except at weddings. Now, I dance several days a week.

When I was 45, I started doing Jazzercise and, when I’m not sick or travelling, I go most weekdays.

Despite popular belief, Jazzercise is a vigorous total-body workout. It comprises about 35 to 40 minutes of aerobic dance, followed by 20 minutes or so of strength training to music. Still, it’s like going to a party every day. If I weren’t burning some 500 calories an hour, I’d almost feel guilty going. Now, I learn it’s a total-body-and-mind workout.

People thought I was crazy when I wanted to have a Jazzercise party for my 50th birthday, but that’s exactly what I did. I had my 51st at IHOP.

I wonder how many more years before the intelligence kicks in.

On October 15, National Dictionary Day Eve, I came out with my confessions of being a dictionary dweeb. Since then I have received a variety of dictionaries from some thoughtful readers. One day soon, we will get into A Dictionary of Slang and Unconventional English, which I received from a reader in Alaska (make of that what you may; we’ll need to see if “refudiate” is listed).

In the 10/15 post, I recalled the first dictionary I ever had, The Harcourt Brace School Dictionary, which I used in the fourth through sixth grades. I thought I had it around here somewhere but it was not be found among my childhood artifacts. I will say it again, I loved that dictionary. And yesterday I discovered that everything I know about grammar, spelling and word usage came from that primer. Which explains a lot.

My mother sent me the old dictionary for my birthday. It still smells the same as it did in 1970.

It seems that, when I went on to junior high, I passed the Harcourt Brace on to my younger brother, who wrote his name in it three times, along with a phone number and a note that said, “If not home, call back in 2 or 3 hours.”

The real nuggets are found on the first 65 pages, before the definitions of words beginning with A.

Pronunciation keys, spelling charts, abbreviations, basic dictionary skills, age-appropriate etymologies, parts of speech, idioms, they’re all in there, along with a section on Spotting the Troublemakers. There are sections on variant spellings and pronunciations, regional pronunciations and British and American spellings.

It’s good to know that during these years, I wasn’t spending all my time reading Tiger Beat and pinning Bobby Sherman and David Cassidy posters up on my walls.

So class, who can tell me what inflectional forms are? The inflectional forms of a word are forms changed by adding a morpheme. What’s a morpheme? I need a refresher myself. I can’t even make out Wikipedia’s explanation. Expect a post on morphemes soon. Perhaps you’d like to write it.

Filed under All Things Wordish, Family and Friends, Reading

How long do you suppose you’ll live? Why? Have you ever known anyone who has lived 100 years or more and attributed a long life to a particular ritual or lifestyle?

If you are lucky enough to be fêted by NBC’s Willard Scott, then you have an opportunity to tell the world your secret to longevity. These secrets can be contradictory—some centenarians attribute their advanced years to eating bacon at every meal and a taking a nightly nip of gin, while others tout a life of temperance.

One of my recent favorites to receive a Smucker’s greeting from Willard was a woman whose secret to staying young is “using Crisco every day, on her face.”

Yesterday, a Jamaican-born Washingtonian turned 107. She has proudly has enjoyed a lifelong relationship with red meat, and shared a few other secrets in a Washington Post interview over the weekend.

Having had a milestone birthday of lesser proportions last year, I now pay attention to long-living seniors, and check to see how my own lifestyle matches up. Betsy Stanford, the 107-year-old honoree, is fastidious. Check. She plays Scrabble and works crossword puzzles. Check, check. She carries the phone numbers of family and friends in her head. Check (in my case, I am afraid I’ll misplace the list).

I’m not quite sure what I think of the key ingredient in Betsy’s daily diet—a Guinness and Ensure smoothie. I may have to give it a try.

What lifestyle secrets have carried you as far as your most recent birthday?