It’s time for a cheery topic; wouldn’t you agree?

Something that gives me a cheery disposition is thinking about Dick Van Dyke.

While driving around last weekend, I caught an NPR interview with him, in which he also played a round in Wait Wait…Don’t Tell Me! I grinned broadly behind the wheel, as much as I did when I saw Matt Lauer interview Dick on Today a few weeks ago. 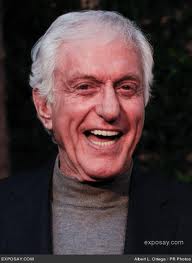 I can’t imagine a soul who doesn’t love Dick Van Dyke. No matter your age, you surely identify with at least one of his many happy-go-lucky characters. I’d be hard pressed to name a favorite – it would be a tie between Rob Petrie and Bert the chimney sweep.

Growing up in a household headed by a funnyman, I identified more with The Dick Van Dyke Show than any other sitcom about a 1960s suburban family. And, while few relate directly to a chimney sweep-slash-sidewalk chalk artist-slash-one-man band, every moment in Mary Poppins in which Bert dances is pure giddiness. Double giddiness remembering my three-year-old singing and dancing and bouncing off the walls to “Step in Time.”

This Spring, Dick Van Dyke published a memoir; even the title is cheery: My Lucky Life In and Out of Show Business. That’s going to be the second book I load on my Kindle.

Dick Van Dyke will be 86 this year—on my birthday, as a matter of fact.

Allow Dick Van Dyke to cheer you up today. Listen to the NPR interview. Watch the Matt Lauer interview. Read about his Lucky Life. Re-watch Mary Poppins or Chitty Chitty Bang Bang, with your kids or alone.  Or sing along to The Dick Van Dyke Show theme song (just don’t trip over the ottoman):

So you think that you’ve got troubles?
Well, trouble’s a bubble,
So tell old Mr. Trouble to “Get lost!”

Why not hold your head up high and,
Stop cryin’, start tryin’,
And don’t forget to keep your fingers crossed.

When you find the joy of livin’
Is lovin’ and givin’
You’ll be there when the winning dice are tossed.

A smile is just a frown that’s turned upside down,
So smile, and that frown will defrost.
And don’t forget to keep your fingers crossed!

If that doesn’t cheer you up, watch one of my favorite DVDs (Dick Van Dykes):

One response to “A happy-go-lucky DVD”