There was much ado about yesterday being the anniversary of the death of Elvis Presley. All kinds of memories, trivia and salutations blasted from live and social media platforms everywhere. Michele Bachman even wished Elvis a happy birthday.

Elvis died August 16, 1977. It was as big a deal then—my senior year in high school—as Michael Jackson’s sudden death a couple of years ago.

One reason I remember this so vividly is that another cultural icon died later that week; but the news was a bit overshadowed by the passing of The King.

My younger brother was deep in mourning because he lost both of his favorite entertainers in the same week. Elvis was one; the other was Groucho Marx. 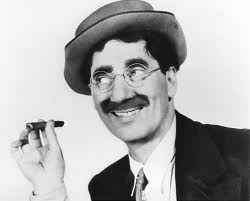 My brother had been Groucho for Halloween just that year. No, wait. It wasn’t Halloween; he just dressed and got made up like Groucho. I had a theatrical make-up kit that contained hair for mustaches and eyebrows, as well as greasepaint to draw circles under, and wrinkles around, the eyes. There’s a framed picture somewhere; I’ll have to see if I can find it. Stay tuned.

Julius Henry “Groucho” Marx was almost 87 when he died, which might be why it wasn’t program-interrupting news. Elvis Aaron Presley was 42. All I know is that my little brother was one mopey 10-year-old.

Could it be that Elvis is really still alive? I Just Can’t Help Believing.

Should we honor the great Groucho this Friday? You Bet Your Life.

Filed under Family and Friends, In Memoriam, Movies, Television and Radio, Music