I was well into my sixes or sevens before I noticed my Dad was different from other fathers.

It wasn’t until the fourth grade that it more meaningfully got my attention. We were asked to write down what our fathers did for a living. (They didn’t ask about our mothers.)

We were allowed to take this assignment home, even though it called for only a word or two. I took mine to my father, asking him how to spell “comedian.” He said he preferred “entertainer.”

The next day at school, we read our responses aloud. There were a lot of businessmen and government employees and several fathers working at the Pentagon. One girl reported that her father told her what he did was nobody’s business. Years later, I realized that her father worked for The Washington Post, when I noticed his byline as an overseas correspondent, then later as chief of the London Bureau and, before retiring, the paper’s ombudsman.

But I assure you, there were no other entertainers.

I’ve written plenty in this space about both of my parents, so if you’ve been around here for a while you have a sense of how my folks differ from yours.

My father turns a big number ending in zero today, so it gives me occasion to reflect on what makes him stand out. Not as an entertainer; most people already know that.

How My Father Is Different From Yours
by Monica Russell; oops, Welch

Happy x0th birthday, Dad. You’re one of a kind. 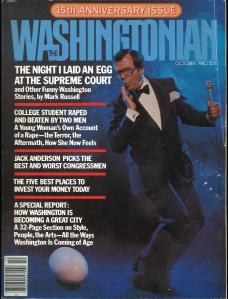 Filed under Family and Friends, Movies, Television and Radio