When I was a kid, they didn’t make cars with DVD players in them. Even when my son was little, we never had such a thing in the car.

When we went on long trips, we played games like Twenty Questions, “I went to the supermarket” and a word game called Ghost.

Often when we got to our vacation destinations, and there was no television, we played games. I recall many seasons as a kid in Ocean City, playing Mad Libs. I cut my little word nymph teeth on Mad Libs. 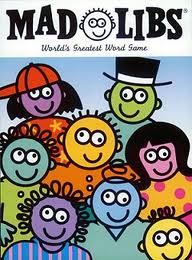 For those who don’t remember, Mad Libs were–still are, I guess–short stories written with blanks in them. The blanks call for certain parts of speech to be inserted in various places in sentences within the story. The person who holds the book asks his or her play mates for nouns, verbs, adjectives, adverbs and exclamations, and occasionally, names of body parts or famous people, which, of course, are provided arbitrarily and without context. After all the blanks are filled, the holder of the book reads the story aloud. Hilarity ensues.

This past Monday, Leonard Stern, co-creator of Mad Libs, died at the age of 88. Amusingly, his Washington Post obituary was written in Mad Lib form:

“As a writer, director and producer, Leonard Stern was a legendary (noun) in show business. He had an (adjective) career that took him to (geographic place) with (celebrity name). Fond of (article of clothing), standing (a number) feet tall with a gray (body part), he (verb) more than a share of (noun), including (liquid).”

I was interested to learn also that Stern was a writer and producer of “The Honeymooners,”  “Get Smart” and a few other classic sitcoms. Apparently, Stern got the idea for Mad Libs when looking for an adjective for a Honeymooners script. He and a friend then began writing stories with blanks in them and took them to cocktail parties; the rest is history.

Yesterday I discovered a website that allows you to play Mad Libs online.*

Maybe on your next family trip to the shore—or at your next cocktail party—you can pull out your iPhone, log in and have a rip-roaring good time.

Rest in peace, Leonard Stern. You were a (adjective) (noun).

*By the way, I tested the Mad Lib-generating website. You can only imagine what I did to Hamlet’s third soliloquy.

Filed under All Things Wordish, Family and Friends, Sports and Recreation