In January of this year, my father and I went to visit the grave sites of his parents, who are buried in Northern Virginia. I hadn’t been since my grandmother was buried in 1970, when I was 10, so it was as though I were visiting that cemetery for the first time.

I find grave markers interesting, so I walked around to visit some of my grandparents’ neighbors, noticing the years of their births and deaths, wondering who might have been when they lived above ground.

I came upon this marker, which stopped me on my path. 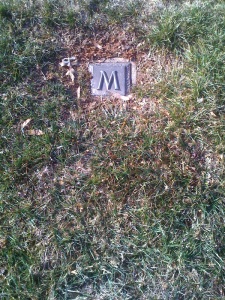 Wow, M. Who could this be? Could she be Monica, without a last name? Could it be someone with no family, or someone whose family couldn’t afford any more than a single letter?

For the past six months, I’ve imagined who M was, when she or he might have lived and died. I’ve created scenarios and stories in my mind. Was she a wartime nurse? Was he a child? Does M’s family, if they exist, ever come to visit? Are flowers ever placed on M’s grave? I just couldn’t let it go.

Recently I learned that a friend’s son has a summer job mowing grass and maintaining the grounds at that same cemetery.

I jumped on the chance to learn M’s identity. I e-mailed this picture to my friend, asking if her son could find out who this deceased person, with whom I’d been so preoccupied, was.

A day later, the reply came:

This is the first time I’ve been disappointed to learn that someone didn’t die.

Filed under Family and Friends, Foibles and Faux Pas, In Memoriam