I don’t know if you’ve noticed, but I seem to have hit a little slump.

There have been days recently when I didn’t post a blog entry, in part for lack of time and in part for lack of inspiration. Also, lately, I feel that my writing lacks the energy it used to have and I don’t want to subject readers to lethargic dronings.

I’ve been at this blogging project for 16 months now, having written 385 pieces. Inspiration used to rush at me faster than I could mash it into the keyboard. Lately? Not so much.

Over the weekend, I tackled a small writing project that gave me the same sense of paralysis. Eventually I found the energy to hand in to the client what I think was good work, but not without teeth-grinding anxiety.

As I researched punctuation for Friday’s post, I came upon an interesting perspective on writer’s block. Then another one. Both jumped to the same conclusion: Essentially, quitcherbitchin.

Here’s what author Philip Pullman said in 2006 on the subject of writer’s block: 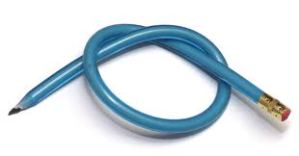 “Plumbers don’t get plumber’s block, and doctors don’t get doctor’s block; why should writers be the only profession that gives a special name to the difficulty of working, and then expects sympathy for it?”

A bass player named Paul Wolfe wrote a piece recently on his blog, which worked from the same premise—that there’s no such thing as writer’s block—also using the plumber analogy. It’s worth a glance if you can relate.

So if there is no such thing as writer’s block, what has gotten a hold of me?

When I approached my recent client project, you would have thought I had decided to try skydiving. Profound fear consumed me.

I moved my computer from my office to the dining room table so I’d have room to spread out and to breathe. I set my papers out neatly. I took a shower. I returned to the computer. I straightened some knickknacks. I sat up straight, put my fingers on the keyboard and took a deep breath. I opened a six-ounce box of SweeTarts, sifted through the candies and ate all the purple and orange ones. Then I arranged the blue ones along the edge of the box, then the red, then the green. By this time my stomach was in my throat and my heart was racing. Utter silliness. This was easy stuff, nothing complicated. As soon as I typed the first word, the others came, but it took me more than eight hours to finish. It was touch and go there for a while.

So it goes with the blog. I don’t wake up with ideas and words to support them the way I used to.

The bass player says if you believe in writer’s block, then it wins. Pullman doesn’t believe in it either.

So maybe it’s just an old fashioned case of jitters.

Maybe I ought to lay off the SweeTarts.

Or maybe it just boils down to this bumper sticker: