They say everyone should have a current résumé and a valid passport.

I have both. Neither one gets much love these days. In fact, I just noticed that my passport was renewed five years ago, so it’s at exactly the halfway point of its valid life. The sad part is that neither the passport nor I have left the United States since 2001. It’s waiting, in its safe place, along with all the passports I’ve had since age 10 (when, by the way, I apparently stood at 4 feet, 11 ½ inches tall). My current passport is stiff and uncreased and has a pretty good photo if I do say so myself. I just wish a customs agent could see it. 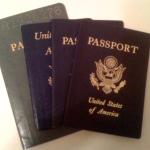 My last passport saw some action and it shows. In the years before it expired in 2006, I travelled to Switzerland several times, France several times, Greece twice, Spain, Italy, the United Kingdom, the United Arab Emirates, Hong Kong, Indonesia, Thailand, Vietnam and Aruba. I like to look back at the pretty visas inserted by countries that require them.

I still travel often, but to places like Detroit and Tupelo and Cleveland, not that there’s anything wrong with that. It’s just that my passport and I are itching to fly beyond U.S. borders for a change. We just need a reason. And a lot of money.

I am reminded of an I Love Lucy episode in which the wives tried to raise money to accompany their husbands to Europe. They staged a raffle for a bogus charity called Ladies Overseas Aid. (“We’re ladies, we want to go overseas and boy, do we need aid!”)

This lady needs to come up with a clever way to see the world on someone else’s nickel. Any ideas?