Any way you couch it

Over the past week I’ve solicited suggestions for topics to cover here. It’s my version of taking requests. While I chew on those having to do with synchronicity, semantic infiltration and the origin of “draconian,” I thought I’d start off with an easier one.

Sue wrote: “How about writing a blog on the use of couch, sofa, divan?”

I don’t know precisely what Sue would like to know, but I have two initial observations. One is that, while the proper name for this piece of furniture is “sofa,” many people call it–correctly or incorrectly–a couch. My other reaction is that there appear to be so many other names for this object. Immediately I thought of about half a dozen.

So, Sue, jump in and take this conversation wherever you like. In the meantime, I’ll follow the two threads.

I was brought up to say “sofa,” which doesn’t make it right, but it also happens to be what furniture stores call it. They would know. I could be wrong, but I don’t believe you would ever enter a store—in person or online—and see something called a couch.

I suspect “couch” comes from the French verb, coucher, or to lie down (I think that’s what it means; It could mean more, as in “Voulez vous coucher…”) When I hear “couch,” I envision someone lying, not sitting. A couch is where you spend a Sunday afternoon, watching football or, in my case, working the Sunday crossword under a fuzzy blanket for a committed period of time. Otherwise, with or without someone sitting on it, it’s a sofa.

What else could it be? As Sue points out, it could be a divan. I had an aunt and uncle who called theirs a divan, a term I thought was perhaps unique to their generation. Apparently,” divan” is Turkish in origin; how it got from Turkey to my aunt and uncle is unknown to me. If memory serves, these same relatives might also have called it a Davenport, which I understand was a brand name (like the Norge).

I understand Canadians call theirs a chesterfield.

As far as I know, chesterfields, divans, Davenports, couches and sofas are pretty much alike structurally. Then you get into your settees, love seats, fainting couches and futons.

I can speculate about how these variations came about, whether they are separated by generations, by regions or by structural properties. Better yet, The Word Detective explores this matter in much more detail, so let’s benefit from his research. If that doesn’t do it for you, there are many more blogs that delve into all the nuances.

Or you can consult this sofa and living room furniture glossary. Notice, nowhere in the glossary will you find “couch.” 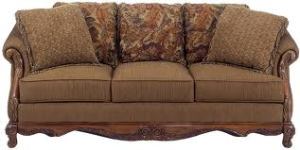 Filed under All Things Wordish, Hearth and Home, Marketing/Advertising/PR

11 responses to “Any way you couch it”